You Tube video of the launching:

Harry J. Defoe was born in Bay City Sept. 2, 1875, son of a Great Lakes sailor, Joseph DeFoe, and nephew to a local boat builder, John DeFoe. As a boy Harry liked to whittle toy sail and tug boats and float them in the Saginaw River. As a teenager he built working steamboats from wood and scraps of metal.

Harry became a teacher and even served as a school principal but his heart was focused on the river and its vessels.

In 1905 Harry founded The DeFoe Boat & Motor Works along with his brother, Frederic, a New York lawyer, and his brother-in-law George H. Whitehouse, a fish wholesaler.

Harry designed boats, selling full size patterns similiar to women's dress patterns. He also built the boats in his shipyard on the river at 5th Street. The U.S. military noticed and in 1917 the Navy ordered five torpedo chasers with Winton gasoline engines, followed by an order for eight 98-foot steel harbor mine planters. These were steam vessels with heavy derricks.

DeFoe expanded his yard buying and after the war began to build yachts, including the 90-foot yacht which later became famous as the "Honey Fitz," so named by President John F. Kennedy after his grandfather, one-time mayor of Boston. Another well-know owner of a Defoe yacht was Ralph Evinrude who made outboard motors.

Tom DeFoe and Mrs. J.P. Hurley christen the first of the Navy's guided missile destroyers built at the DeFoe Yards -- the USS Henry B. Wilson -- in April, 1959.

During Prohibition Harry got a contract for 15 wooden, 400-horsepower speed boats used by racers like Detroit's Gar Wood, not to mention local rumrunner. Charles Kettering wanted his with self-starters. When DeFoe declined, Kettering said, "Give me two men and I'll make it self-starting tonight." DeFoe got the message and began making his boats with starters.

When the Depression hit, the government tried to rescue the industry and DeFoe benefited with orders for Coast Guard vessels, a Detroit River mail boat, and a few other projects.

The advent of World War brought and end to the depression and more government contracts.

DeFoe invented the "upside down and rollover" method of shipbuilding. In the "roll over" a big cradle, the exact size and shape of the ship, was built bottom side up. Welders attached the steel to the skeleton eliminating difficult overhead welding and reducing man-hours by 90 percent. Then the vessel was flipped upright for its completion. 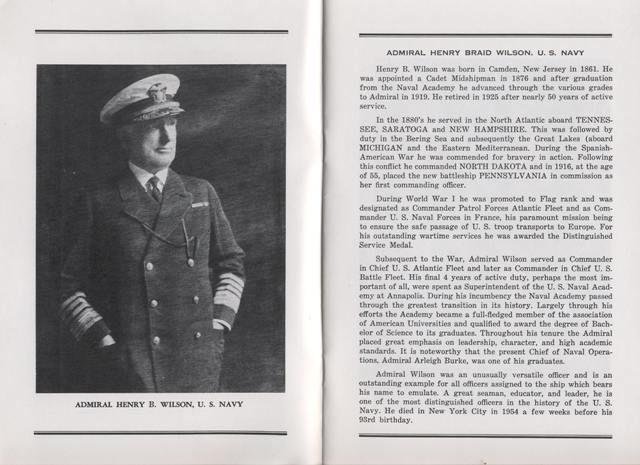 The destroyer Wilson hits the water.

Defoe built 58 sub-chasers faster than the Navy could deliver the power plants. By the end of the war the firm had built in addition to the sub-chasers 47 infantry landing craft, 17 destroyer escorts, 10 freight and ammunition carriers, nine high-speed troop transports, four rescue tugs and three harbor tugs.

The number of employees topped 4,000 during the war, making DeFoe one of Bay City's largest employers.

Steady work at the 40-acre yard continued after the end of the war. Defoe built six 119-foot luxurious pleasure yachts that sold for $250,000 each. It built two 643-foot bulk ore carriers, the Charles L. Hutchinson, later renamed the Ernest R. Breech, and the Richard M. Marshall, later renamed the Joseph S. Wood. The yard continued to build harbor tugs and other ships. One Defoe ships, the R.V. Knorr, discovered the wreck of the Titanic.

On March 21, 1957, at age 81, Harry DeFoe died while negotiating a deal with the Navy in Washington. 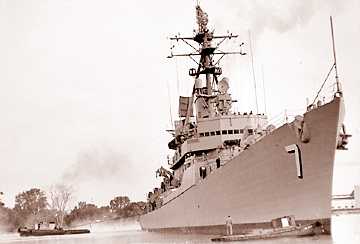 The Wilson upright at Bay City

His sons Thomas and William took over and a grandson, Thomas E Defoe, joined the company in 1966. The yard produced seven 438-foot warships, including the HMAS Perth, the HMAS Hobart and the HMAS Brisbane for the Australian Navy. The yard also built guided missile destroyers, the USS Samuel Robinson, the USS William Hoel, the USS Henry B. Wilson and the USS Lynde McCormick.

The firm remained in family hands and incorporated in 1956, with Thomas, then 47, as president, and William as executive vice-president, later board chairman. At the time Defoe employed about 1,000 workers

But by the mid 1960s the firm's future was looking bleak. Shipyards on the east and west coasts had deeper water and fewer delivery problems. The Saginaw River suffered dredging, bridge and water level problems.

"Our competitors are on either coast," said William Defoe. "This makes for sharp competition because of our delivery costs." The opening of the St. Lawrence Seaway did not produce a positive impact. "In fact, it's had the reverse effect," Defoe later said. "The Seaway opened U.S. ports to more foreign ships which can be built for less and operate for less than U.S. ships," he said. "The future for U.S. Great Lakes Carriers is dim," Defoe said in an 1965 interview. Aging equipment and replacement costs offered more obstacles.

President Thomas Defoe announced the closing and blamed it on "a lack of business and federal cutbacks in domestic shipbuilding.

But well-built DeFoe vessels continue to sail the lakes and seas as testament to the quality of the Defoe product.

USS HENRY B. WILSON is the first ship of the Navy to bear this name.  She is the first ship to be launched of the U.S. Navy's first class of destroyers built from the keel up to fire guided missiles.  USS HENRY B. WILSON was built by the Defoe Shipbuilding Company at Bay City, Michigan.  At the time of her commissioning, the ship was the largest warship ever constructed on the Great Lakes.  She was christened by the sponsor, Mrs. Patrick J. Hurley, daughter of Admiral Wilson.. USS HENRY B. WILSON was launched on 22 April 1959 in a spectacular side launching.  Because of the unique circumstances under which she was built, the traditional champagne bottle was filled with water from the Great Lakes, the St. Lawrence River and the Atlantic Ocean.

USS HENRY B. WILSON carries a variety of weapons and sensors, giving her the capability to deal effectively with treats on high seas.  Her powerful sonar, "ASROC" (Anti Submarine Rocket) and torpedo installations equip her to fight submarines at extended ranges.  Her supersonic guided missiles have the capability of destroying aircraft and warships many miles away.  Her 5"/54 rapid fire guns provide the ship with the flexibility needed to engage surface, air, and shore threats.  USS HENRY B. WILSON has a 1200 PSI Engineering plant which produces 70,000 shaft horsepower to drive the ship at sustained speeds of over 30 knots.  Each of the 4 boilers are equipped with a completely automatic combustion control system.   The ship's operations and living spaces are air conditioned.  She also has the latest communications and electronics facilities.

Since her commissioning in December, 1960, USS HENRY B. WILSON has participated in twelve cruises to the Western Pacific.  She fired over 50,000 rounds in several hundred fire missions against North Vietnamese and Viet Cong targets from 1965-73.  While on a 1975 cruise to the Western Pacific, the ship participated in the Cambodian and Vietnam evacuations and in the recovery of the USS MAYAGUEZ from Cambodia.  As a result of her ability to perform under pressure, USS HENRY B. WILSON has been awarded the Combat Action Ribbon, Navy Unit Commendation, Meritorious Unit Commendation, Navy "E", National Defense Service Medal, Armed Forces Expeditionary Medal, Vietnam Service Medal, Humanitarian Service Medal, and the Vietnam Campaign Medal.  USS HENRY B. WILSON is a truly versatile ship designed to meet the challenges of an enemy on, above, or below the sea.

"Take in all lines!"  "Sound one long blast!" and the USS Henry B. Wilson (DDG-7) set yet another precedent.  At 0934, Saturday 6 January 1962, she became the first DDG to make the Western Pacific Cruise.  Wilson enhanced her reputation and proved the value of the DDG-2 class ships during the subsequent six months and twelve days.  She conducted fleet Anti-Submarine Warfare and Anti-Air Warfare Exercises, performed planeguard, lifeguard, and Search and Rescue missions, and displayed her might in demonstrations, all in an outstanding manner.  Frequent and demanding operations were the order of the cruise, and Wilson was well-suited for the tasks.  Completion of the first leg of the Pacific transit with Task Group 14.7 found Wilson moored at Pearl Harbor, Oahu, Hawaii, on 13 January.  Wilson basked in Hawaii's sunshine until 22 January, including three days of ASW operations, when the Task Group steamed from Pearl Harbor for the final transit leg.  Wilson arrived in her 'home port away from home port', Yokosuka, Japan on the First of February.  Next, Wilson visited Sasebo arriving there on 5 February after steaming independently through the Philippine and East China Seas.  In Sasebo the ship's basketball and bowling teams, backed by the crew, established winning reputations.  On 20 February, Wilson left Sasebo as a unit of Task Group 77.4, her first of many operations with USS Coral Sea (CVA-43).  Wilson returned to Sasebo a final time from 28 February through 5 March followed by a series of intensive operations in the Philippine Sea, including Anti-Air Warfare and gunfiring exercises and a demonstration for Japanese dignitaries. 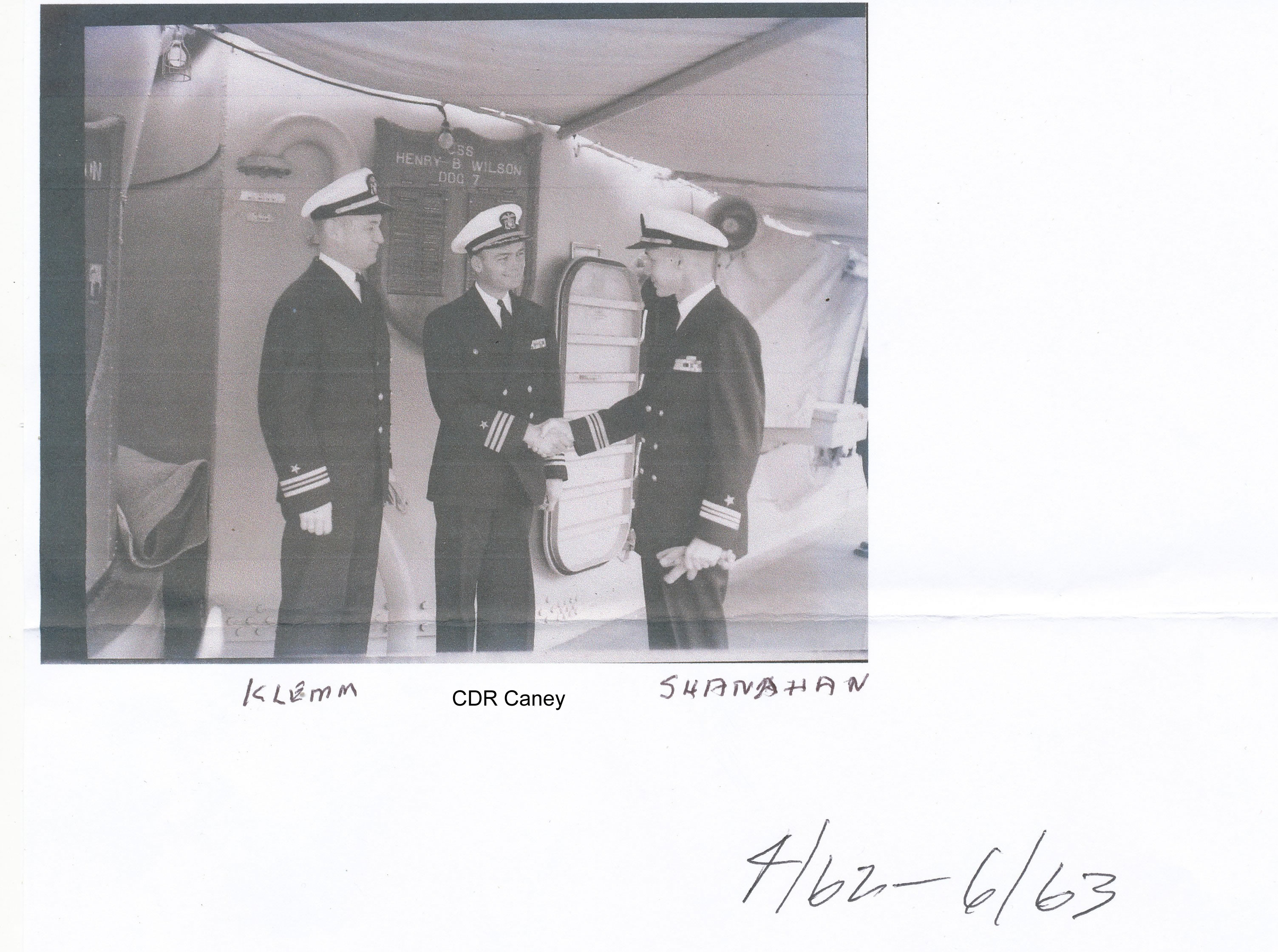